Mark Mahaney of RBC Capital rates stocks in the technology sector and is one of the top 15 analysts rated on TipRanks. Mahaney maintained a Sector Perform rating on shares of King Digital Entertainment with a price target of $17.00, which implies an upside of nearly 12% from current levels. The analyst noted, “On last quarter’s call, management said they expected 2015 seasonality to be similar to 2014, though the implied Q/Q decline this year is much greater than last year’s. This coupled with the overall softness in the mid-year makes us incrementally cautious. For us to become constructive on the stock, we would need to see stable trends showing bookings growth AND diversification away from CC – which likely isn’t attainable until 2016. We continue to view KING as a leading Casual Gaming company which is differentiated in that it has a Mobile-oriented, freemium-model, highly profitable platform.”

Wedbush analyst Michael Pachter sounds more optimistic about King Digital Entertainment’s long-term potential, stating, “Notwithstanding the market reaction, we believe King is on the right path.” He explained, “The company’s entry into non-casual genres involves more complicated game development than it has dealt with in the past, and we believe that the gap in its release schedule is a symptom of a deliberate approach to these new genres. We expect “all other” game bookings to fully offset continuing declines in the core business beginning in Q3, and we anticipate a return to growth in Q4 and beyond.” With that said, the analyst reduced the price target to $21 (from $23), while reiterating an Outperform rating on the stock. 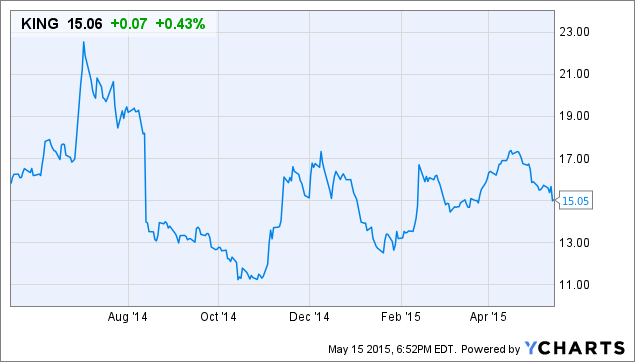