Analysts are weighing in on IntelliPharmaCeutics Intl Inc (USA) (NASDAQ:IPCI), following the news that the FDA has provided the company with guidance regarding its abuse-deterrent Rexista Oxycodone XR IND, importantly communicating that the company will not be required to conduct Phase III studies if bioequivalence to Oxycontin is demonstrated.

Brean Capital analyst Jonathan Aschoff believes that Intellipharmaceutics has already demonstrated bioequivalence in its recent submission to the FDA, where top-line data results from three definitive Phase 1 PK trials all have demonstrated the bioequivalence of Rexista and Oxycontin.

Aschoff wrote, “We estimate that the freedom to forego Phase 3 testing will shave off at least $20 million from the cost of development, as well as about 18-24 months of time. The NDA process should now only cost Intellipharmaceutics about $1-1.5 million. We believe that the FDA was satisfied with the bioequivalence data in the IND and thus what remains to be completed prior to NDA submission primarily involves six-month stability testing comparing bioequivalence before and after the six-month period.”

The analyst rates IntelliPharmaCeutics shares a Buy, with an $8 price target, which implies an upside of 172% from current levels.

Jonathan Aschoff has a total average return of 7.5% and a 53.1% success rate, according to TipRanks.com, which measures analysts’ and bloggers’ success rate based on how their calls perform. Aschoff also has a -8.6% average return when recommending IPCI, and is ranked #456 out of 3607 analysts.

Additionally, Maxim Group analyst Jason Kolbert spoke with IPCI management and come with the conclusion that bioequivalence has already been demonstrated, and that the management’s confidence that they can meet all the filing requirements is quite high.

Kolbert noted, “This is good news. It shaves off years from our time line and estimates. We need to review the impact to our model and assumptions, suffice to say skipping pivotal trials is positive. We expect a partner to be announced prior to approval. IPCI’s own, high margin, brand product with IP represents the transition of this company to something more than a technical supplier of XR generics.” 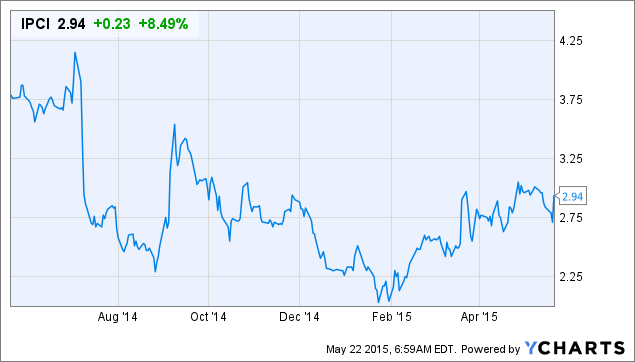