FBR analyst Christopher Rolland has high hopes for Intel Corporation (NASDAQ:INTC), reiterating a Buy rating on the stock with a 12-month price target of $40, in a research report released today. The report comes after the company announced in-line first-quarter results, while second-quarter top-line guidance of $13.2 billion was slightly below the Street’s $13.4 billion estimate.

In his research report, Mr. Rolland wrote, “We believe Intel’s new 2015 full-year guidance was slightly better than feared as lower-quality items buoyed our new EPS result. Indeed, 2015 is shaping up to be a strange year, in which 1H15 PC processor units will likely dramatically under ship PC demand, and 2H15 processor units will likely over ship natural PC demand on initial Win10 PC channel build. The net result is a slightly disappointing year in which PC end demand will decline mid single digits.”

Mr. Rolland further commented, “While we expect many bears to again revive the “death of the PC” thesis, we believe there is another issue at hand. Management essentially acknowledged that PC life spans have increased from ~3 years in 2010 to ~4 years (we think more) in 2015, creating a –5% annual headwind for natural PC demand. If PC life spans were to sustain (or even contract), we believe the power of Intel’s PC monopoly would ultimately shine through the financials.”

Oppenheimer analyst Rick Schafer took the other route, noting that longer term growth/profitability concerns in Mobile and the secular decline in PCG keep him sidelined here. The analyst reiterated a Perform rating on the stock.

Mr. Schafer wrote, “Expectations for flat revenue Y/Y imply a fairly significant 2H PC ramp, driven by launches of Win10 and Skylake, which we believe could ultimately prove disappointing. Structural tailwinds in DCG remain a lone bright spot, in our view, as the business is likely healthy/unchallenged in 2015.”

“GM trajectory looks to be partially offsetting a better than expected top line, and lower than expected taxes, and when coupled with structural challenges in PC/Mobile, keeps us sidelined here.”, the analyst added.

According to TipRanks.com, which measures analysts’ and bloggers’ success rate based on how their calls perform, analyst Rick Schafer has a total average return of 25.9% and a 81.0% success rate. Schafer is ranked #15 out of 3574 analysts. 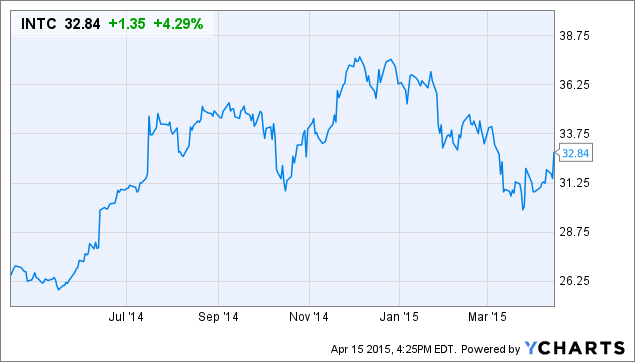