Zynga Inc (ZNGA) will post its second-quarter 2014 results after market close on Thursday, August 7 followed by an earnings call. BMO Capital Market analysts (Edward Williams, San Phan and Thomas F. Andrews), in a report dated August 5, 2014, expect the company to post bookings of $189 million and adjusted EBITDA of $17.2 million compared to the $188 million and $8.3 million in the corresponding quarter of the previous year.

Analysts are a bit conservative in the estimates, when compared to the consensus estimates of $191 million in bookings and adjusted EBITDA of $18.3 million. Analysts believe, “it may take another quarter or two for any new growth plans to have a meaningful impact on the company’s financial performance.” Zynga has a cash balance of approximately $1.1 billion, which is over 40% of its market cap; offer a strong base to the current share prices.

In the earning call announcement, the game maker could provide an update on its restructuring efforts in which the core segment is mobile gaming. Zynga has provided guidance of $175-$195 in bookings and $10-$20 million in adjusted EBITDA.

At present, the Monthly and daily average user of the company on Facebook Inc (FB) are less when compared to that of the previous year. The company still ranks second among the developers on Facebook with 75 million MAU and 16 million DAU, according to AppData.

Zynga has cut down heavily on its workforce reducing it by one-third since the beginning of 2013. With the progress in the cost reductions, the workforce reduction is starting to stabilize for the company, according to the analysts.

BMO Capital analysts have a Market Perform rating on Zynga with a price target of $4.50, and believe the “management team is taking the right steps – trimming costs, investing capital in the higher growth area of mobile, focusing on improving game quality, and building the right management team”.

According to TipRanks.com, which measures analysts’ and bloggers’ success rate based on how their calls perform, BMO lead analyst Edward Williams has a total average return of 11.0% and a 64.7% success rate. Williams is ranked #827 out of 3205 analysts.

Wedbush analysts, in a report dated August 5, 2014, have assigned an Outperform rating to Zynga with a 12-month price target of $7. Analysts are expecting booking of approximately $195 million and earnings per share of 1 cent. Bookings are expected to rise sequentially from $161 million in the first-quarter on the back of mobile growth and advent of titles such as Zynga Poker and Farmville 2. 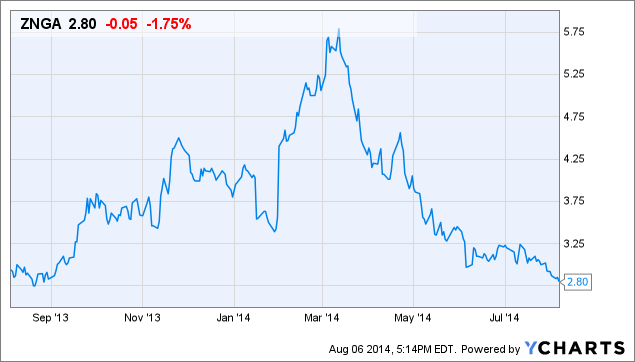