Tesla Motors (TSLA) released its fiscal second-quarter results on Thursday. The EV maker posted non-GAAP earnings of 11 cents a share compared to the consensus estimate of just 4 cents. Non-GAAP revenues came in at $858 million, zooming past the Wall Street expectations of $811 million. Tesla delivered 7,579 Model S cars worldwide, compared to the guidance of 7,500 and analysts’ expectation of 7,546. Non-GAAP gross margins stood at 26.8%, up from 25.4% in the first quarter.

Tesla’s Q3 deliveries to be affected by factory shutdown

Had it not been for the factory shutdown, Tesla’s Q3 delivery guidance would have been 9,500 units and production target would have been 11,000 units in the current quarter. Anyway, the company expects to deliver 13,000 units in the fourth quarter, well above Barclays estimate of 11,597 units. Tesla reiterated its full-year delivery guidance of 35,000 units despite the factory shutdown.
Tesla aims to sell 100,000 vehicles in 2015
Morgan Stanley analyst Adam Jonas said the EV maker’s production and deliveries run-rates are at least one or two quarters ahead of his forecast. Tesla aims to sell 100,000 cars in FY2015. That figure is 25% higher than Adam Jonas’ expectations of combined Model S and Model X deliveries in 2016. Meanwhile, Barclays analyst Brian Johnson expected total deliveries of 58,000 units in 2016. Looks like Tesla would be eyeing more than 200,000 units for 2016.
The delivery guidance provides some insight into the Elon Musk-led company’s expectations for a steep delivery ramp in coming years. Deliveries should rise drastically after the launch of Model 3, which is likely to hit the roads in 2017.  After Panasonic Corporation (ADR) (PCRFY) confirmed its partnership with Tesla for Gigafactory, Jonas expects more partners to come forward for precursor materials, components and technology. Morgan Stanley said Tesla remains its top pick among U.S. automakers.
For more ratings news on TSLA click here. 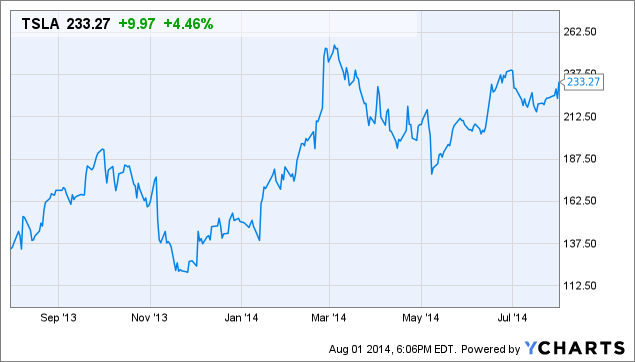