Analysts are weighing in this afternoon on Gilead Sciences, Inc. (NASDAQ:GILD), after the U.S. pharmaceutical giant reported second-quarter results that surpassed analysts’ expectations on the strength of strong sales for its hepatitis C treatments. In reaction, Gilead shares are up 3.26% to $116.76 in after-hours trading.

J.P. Morgan analyst Cory Kasimov commented: “As has become the norm, the HCV franchise drove the top-line with $4.9B in total sales, easily surpassing consensus of $4.4B. For the second time this year, GILD increased FY15 net product sales guidance to $29-$30B vs. JPMe of $29.6B (we had considered prior guidance of $28B-$29B to be slightly conservative). At the end of 1Q15, Gilead had $14.7B of cash and cash equivalents, and generated $5.7B in operating cash flows during the quarter.”

Mark Schoenebaum of Evercore ISI added, “GILD just put up a what appears to be an awesome quarter. And they raised revenue guidance to where Street already is. Expenses came in lower, and they lowered R&D guidance for the year (this company tends to be conservative, so for them to raise revenue guidance this early in the year speaks volumes).”

The analyst rates Gilead stock a Buy with a price target of $115.

Out of the 20 analysts polled by TipRanks, 18 rate Gilead Sciences stock a Buy, 1 rates the stock a Hold and 1 recommends Sell. With a return potential of 9.1%, the stock’s consensus target price stands at $123.35. 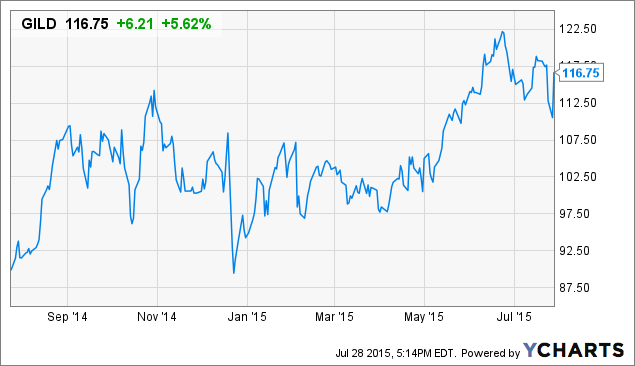