Analyst Vs. Analyst: Nu Skin Enterprises – Who Do You Side With?

Nu Skin Enterprises (NUS) posted a big earnings miss on Wednesday, and analysts are taking a wait and see approach, while others are charging ahead. In other words, the bulls are still quite bullish in spite of the results, while the bears have even more reason to be bearish.

In a note dated Aug. 5, 2014, Canaccord Genuity analysts Mark Sigal and Scott Van Winkle maintained their Hold rating on Nu Skin. They note that the company actually missed its guidance for earnings per share by about 10%, posting $1.13 per share. Management had guided for earnings of around $1.25 per share. The company reported $650 million in revenue, compared to management’s guidance of $700 million.

According to TipRanks.com, which measures analysts’ and bloggers’ success rate based on how their calls perform, analyst Mark Sigal has a total average return of -25.8% and a 0.0% success rate. Sigal is ranked #3054 out of 3206 analysts.

Of course China was the big problem in Nu Skin’s earnings results. Sales in the Greater China region were $230 million, which was about 25% below the Canaccord Genuity estimate. That marked another 18% sequential deceleration and a 12% year over year decline. In addition, Nu Skin reported softening distributor metrics, posting an additional 16% sequential decline in active distributor and sales leader counts. The company did halt recruitment for some time due to an investigation by the Chinese government. The analysts note that in the other regions, the company did show consistent and modestly favorable results.

Nu Skin’s guidance for the second half also wasn’t great. The company guided for earnings per share that are about 30% below the Canaccord Genuity team’s estimate. The full year estimate was about 20% under their estimate of $5.10, which was already one of the lowest estimates on Wall Street. The analysts said they’re waiting for more visibility on the resumption of distributor activity in China before becoming more constructive on Nu Skin.

In another note dated Aug. 6, Deutsche Bank analysts Bill Schmitz and Faiza Alwy maintained their Buy rating and $70 per share price target on Nu Skin. They still see a bright future ahead for the company, but they say that for now, difficult comparisons and regulatory overhang are still weighing on the company’s shares. They note of course that the worst problems are in China now, as the company must work through extra inventory there and refinance its debt in a way that is shareholder friendly. They’re not giving up though because next year will hold easier comparisons for the company.

The Deutsche Bank team says “the pain trade is sticking around” but that they still think Nu Skin has better days in China ahead of it. They cited “innovation pipeline, high touch, assisted sale model and compelling distributor earnings” as being positive drivers heading into next year’s easier comparisons. 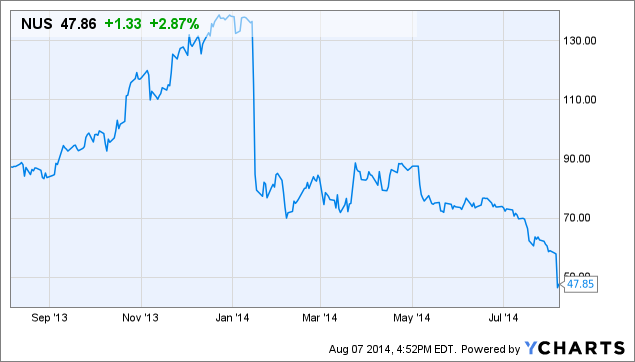