This Analyst Expects a Volatile 2018 for Tesla Inc (TSLA)

While RBC Capital's Joseph Spak is hedging his bets for now on Tesla, he nonetheless spots 13% potential upside ahead for shares.

First, the analyst looks ahead to the Model 3 ramp, noting that battery assembly line challenges at Tesla’s Gigafactory led CEO Elon Musk’s giant to delay its production target of 5,000 vehicles per week from fourth quarter to the first quarter of 2018. However, the TSLA management team continues to bank on the 10,000 vehicles per week target to be achieved by the close of next year. Spak sees reason to believe these production obstacles have likewise run amiss in the fourth quarter, even though the latest supply chain buzz signals an “easing” of bottleneck pressure. By the beginning of the new year, the analyst angles for a production update on Tesla’s fourth quarter deliveries release.

Yet, Spark warns that resolution of battery pack assembly line challenges or not, issues could nonetheless spring up amid other segments of the assembly chain all the same. Currently, Spak projects Model 3 deliveries will hit 3,300 for the fourth quarter and reach 166,000 by next year. “While in the grand scheme of things a quarter or two delay on Model 3 doesn’t matter to the opportunity, it does matter to cash flow,” writes Spak. Considering the company burned through roughly $1.4 billion in cash during its third quarter, the analyst calls for another $1 billion plus in cash burn in the fourth quarter of 2018. By the close of third quarter, Musk’s brainchild boasted around $3.5 billion in cash and suggested a need for a minimum of $1 billion on hand, which to Spak this number “itself sounds low.”

Spak notes, “So there is an intense focus on cash flow in 2018, which is clearly dependent on Model 3. That said, as deliveries take place, working capital should begin to benefit them as they receive cash up front and pay suppliers over months. But capex is likely to remain elevated. ” Much like seen in 2017, the analyst forecasts another around $3.6 billion in capex for Tesla. On a net basis, Spak bets on Tesla to burn through another $2.2 billion next year, however just $1.4 billion in adjusted free cash flow.

While Spak does not “quite see Tesla needing to raise capital,” he admits that “it is close.” Any pushback from Spak’s current timeline expectations or an underperformance on deliveries will increase the probability Tesla will “need” to spring for a capital boost. There could be a case made that Tesla could “derisk” in raising capital regardless, and the analyst would not be surprised to see the company continue to issue capital to fuel its lofty “ambitions.” Yet, Spak comes out with fair words of caution for traders: “Capital raises haven’t hurt the stock in the past, but investors considering adding to positions should think about dilution.”

In terms of the electric semi, from Spak’s eyes, he sees an industry “welcoming Tesla’s vision,” tracking nearly 300 orders for the new truck to date. “This could provide some near-term capital to the company as each reservation comes with a $20k deposit, but in the scheme of things, this is just a drop in the bucket,” writes Spak.

While production is set to kick off in 2019, the analyst notes not to look for the giant to reap the benefits of its semi “until 2020-21 at the earliest,” adding: “We view Tesla’s entry into electric trucks as more disruptive for existing players than as a meaningful revenue/earnings benefit to Tesla.”

This begs the question to Spak: “So how will Tesla play out in 2018?” Ultimately, “We expect another volatile year,” the analyst concludes.

In reaction, Spak reiterates a Sector Perform on TSLA with a $380 price target, which implies a 13% upside from current levels. (To watch Spak’s track record, click here)

TipRanks points to a cautious Street playing it safe on the electric car giant, a real toss-up between the bulls and the bears. Out of 23 analysts polled by TipRanks in the last 3 months, 6 are bullish on Tesla stock, 8 remain sidelined, while 9 are bearish on the stock. With a loss potential of nearly 3%, the stock’s consensus target price stands at $325.82. 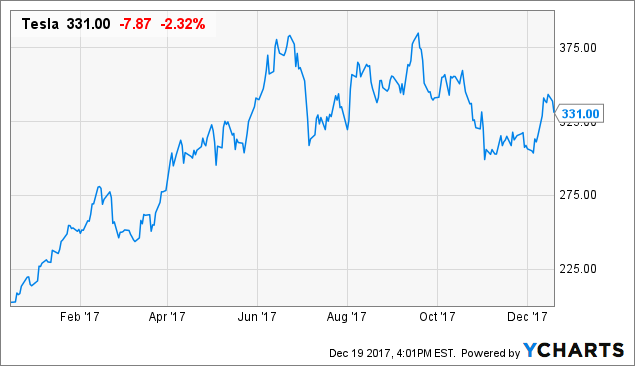