Alibaba Group Holding Ltd (NYSE:BABA) shares were on the rise Thursday after the company reported solid 4Q:FY15 earnings results, with strength in GMV and user growth combined with gains in mobile monetization, driving better-than-expected revenue and EPS. In response to the results, analysts from RBC Capital and Cantor changed their price targets, while sharing their thoughts and expectations of the stock. Alibaba shares are currently trading at $87.97, up $1.97 or 2.29%.

In a research report released May 7, Cantor analyst Youssef Squali raised the price target for BABA to $110 (from $100), while maintaining a Buy rating on the stock. The new price target implies an upside of 28% from current levels.

Squali noted, “We continue to like the stock given BABA’s dominant position in Chinese e-commerce, success so far in transitioning to mobile, opportunity both in and outside of China, and strong balance sheet. We’re adjusting our estimates and establishing a new FY:16 PT of $110.”

RBC Capital analyst Mark Mahaney took the other route, reducing the price target to $110 (from $115), while keeping his Outperform rating on the stock. With Alibaba shares last trading at $87.97, Mahaney’s price target implies potential upside of about 25%.

Mahaney noted, “Revenue of 17.4B RMB beat our/Street views of 17.3B/16.9B RMB, while EBITDA of 8.6B RMB just missed the Street’s 8.73B. Non-GAAP EPS of 3.00 RMB handily beat our/Street estimates of 2.74/2.68 RMB. The major delta vs. Street revenue was China Commerce revenue, so this was a high-quality revenue beat. GMV was just slightly below the Street (600B RMB vs. 603B RMV), but monetization was higher than expectations with a 2.17% blended take rate (vs. the Street’s 2.06%). This was a major issue last quarter, so this reversal is a positive.”

Furthermore, “With weak expectations going into the print, BABA results were strong, though maybe not exceptional. Growth largely decelerated at BABA despite easing comps, and we saw Desktop GMV decline for the first time. However, we saw clear traction on the Mobile side, which should continue in the coming quarters. We continue to believe the BABA Long Thesis is very much intact. BABA remains THE dominant Chinese ecommerce platform, with very robust & consistent Buyer & GMV growth rates (40%+), very high EBITDA margins (50%+), substantial FCF generation, a very consistent management team & strategy, and significant option value in terms of non-retail revenue streams in China and International expansion.” 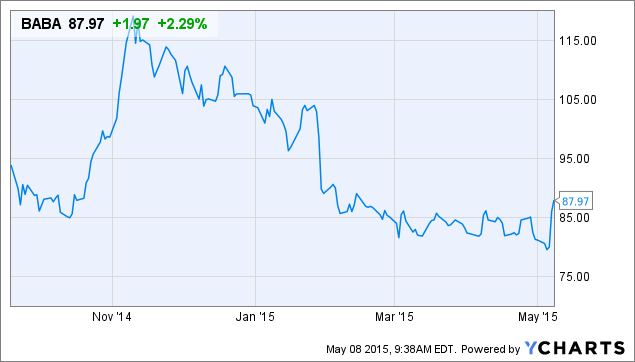