Agnico Eagle: Strong Premium Is Warranted As Shares Have Pulled Back, Says Canaccord

In a research note issued yesterday, Canaccord analyst Tony Lesiak reiterated a Buy rating on Agnico Eagle Mines (NYSE:AEM), following a tour of AEM’s Meliadine project in Nunavut, where the company provided an update on its IVR discovery near Meadowbank.

Lesiak noted, “We continue to believe that the Meliadine project will be developed with a board decision and final permits expected in Q3/15 and first gold possible by 2019. Management envisions a phased build with 3,000tpd (all UG) initially with a ramp to 5,000tpd in year three (UG and OP), modestly below our previous forecast of 6,000tpd. Unit UG mining costs are expected to be near $90/t, in line with CG expectations. Initial capital costs are expected to remain onerous near $1.0B. Grade reconciliation has been favourable (+10%) due to restrictive grade capping. Underground dilution is forecast to be favorable near 25%. 2014 activities are focussed on ramp development, infill drilling and on a technical study, which is expected to be completed in early 2015.”

In closing, the analyst added, “Agnico Eagle shares have pulled back in the last month and are currently trading in line with those of peers on NAV (0.9x). We continue to believe a strong premium is warranted.” 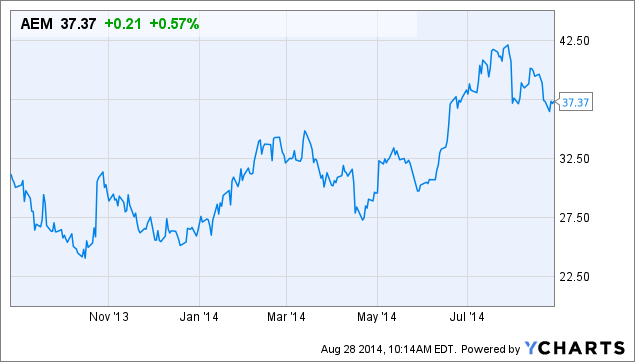