Aeterna Zentaris: Management Is Executing A Productive Turnaround Of The Business, Says Maxim

In a research report issued Friday, Maxim Group analyst Jason Kolbert maintained a Buy rating on Aeterna Zentaris (AEZS) with a Buy rating and a $5 price target, which represents a potential upside of 400% from where the stock is currently trading. The report follows the company’s second-quarter update, which was released last week.

Kolbert noted, “Aetrena Zentaris reported the quarter. The company had an operating loss of $5M and finished the year with just under $40M in cash. We believe management is executing a productive turnaround of the business. The launch of Macrilen should happen in early 2015 and we are hopeful to see this product build traction over time in the traumatic brain injury marketplace. We extend our model to 2020 and assume clinical success with AEZS in endometrial cancer (US & EU).” Furthermore, the analyst noted, “The New Drug Application (NDA) for Macrilen is submitted (11.5.2014 PDUFA) and the review process is now underway. The phase 3 data demonstrated that the compound has the potential to become the first orally approved diagnostic test for AGHD, with accuracy comparable to available testing procedures. We also believe that its utility in traumatic brain injury can be substantial.”

The analyst explained his price target: “We see the primary valuation drivers at AEZS being based on both AEZS-108 (doxorubicin conjugate) and AEZS-130 (diagnostic). We project these revenues in our models. We use a 30% discount rate and triangulate FCFF, discounted EPS, and SOP models. Our model assumes dilution and uses a forecast share count for 2020. The equal weighted average of these metrics points to a $5.00 per share target.”

According to TipRanks.com, which measures analysts’ and bloggers’ success rate based on how their calls perform, analyst Jason Kolbert has a total average return of 9.5% and a 53.8% success rate. Kolbert is ranked #366 out of 3242 analysts. 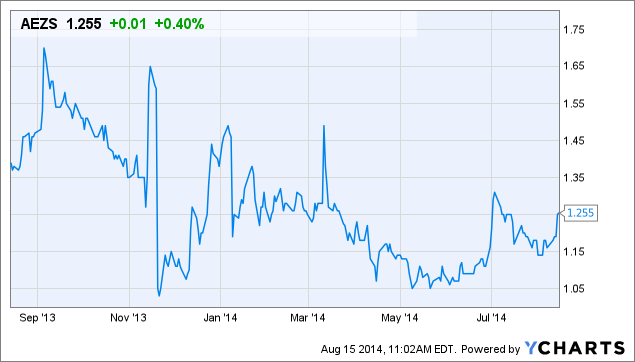