AECOM: Shares Are Attractively Valued At Prices In The Low $30s, Says Argus

In a research note released today, Argus analyst John Eade maintained a Buy rating on shares of AECOM Technology Corporation (ACM), with a fair value of $38 per share.

“We are bullish on the ACM shares as we see rapid urbanization in emerging markets, aging infrastructure in developed countries, and increasing consumption of natural resources as major growth catalysts. The company is seeing stronger results in the Middle East and Europe, showing that its previous investments in these regions are paying off after several challenging years. ACM has also generated strong new order flow, particularly from higher-margin technical and construction services, which should drive additional margin growth in the coming years. We also have a favorable outlook for the company’s new investment fund, which will give it an equity stake in upcoming construction projects”, Eade noted.

The analyst continued, “We think the ACM shares are attractively valued at prices in the low $30s. The ACM shares are trading in the upper half of their 52-week range of $27-$35. As AECOM does not currently pay a dividend, we value the stock using a weighted average of our discounted cash flow and peer multiple comparison analyses”.

According to TipRanks.com, which measures analysts and bloggers success rate based on how their calls perform, analyst John Eade currently has an average return of 4% and a 90% success rate. Eade is ranked #104 out of 3160 analysts. 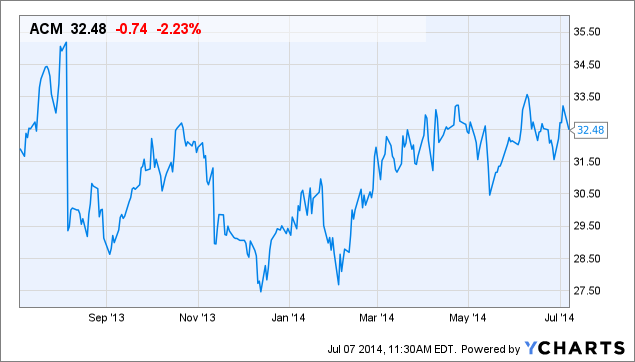