Basham noted, “We believe the AAP story integration and core business turnaround story remains on track and the stock should rise this morning, with subdued expectations into the print.” He continued, “AAP’s expectations topping 2.6% comp, point to solid momentum in the core business, with two-year stacked comps improving to 2.3% from -0.8% in 1Q and -1.8% in 4Q13. We believe the operational turnaround efforts led by George Sherman are starting to bear fruit, and revenue synergies from second-sourcing at CarQuest and Worldpac are beginning to trickle through. Most importantly, these results point to a continued narrowing of the comp gap with peers, which should help narrow the company’s valuation gap.”

The analyst added, “If one discounts our 2016 EPS estimate of $10.50 back to 2014 at a 9% rate, AAP shares are trading at 14x. Higher long-term growth prospects due to greater commercial sub-industry exposure coupled with higher potential for a turnaround in the core business demands a higher multiple, in our view. Our target price is $150 based on valuation multiple analysis backed by DCF. It equates to 17x our 2016 estimate discountedback two years at 9%. We believe AAP’s valuation multiple will expand as investors get comfortable with integration risk, synergy potential and core business prospects.” 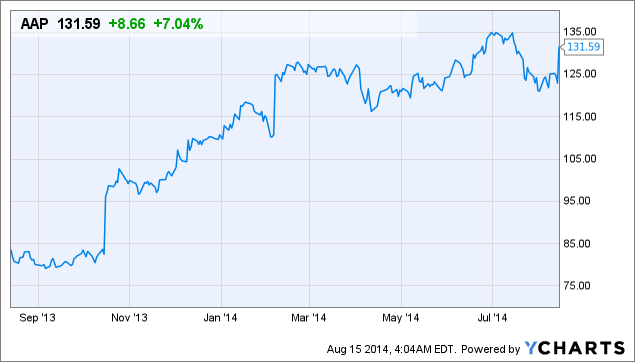