In a research report issued today, J.P. Morgan analyst Cory Kasimov set a Neutral rating on shares of Acorda Therapeutics (NASDAQ:ACOR) with a price target of $42, which represents a slight upside potential from current levels.

Kasimov wrote, “ACOR’s core business performed well in 2014, as the pipeline continued to progress and Ampyra exhibited impressive growth. Looking ahead, however, we are particularly intrigued by the recent acquisition of Civitas, a potentially transformative deal at a purchase price of only ~1x management’s conservative peak sales estimate (~$500M). Via this highly capital efficient transaction, ACOR acquired a largely de-risked Phase 3 asset for Parkinson’s disease (major unmet need), a manufacturing facility that is functioning at commercial scale, and a unique platform technology that could be leveraged for the development of new products. That said, ACOR shares were up 40% in 2014 (largely on Civitas) and there are a lack of meaningful catalysts anticipated in 2015 (CVT-301 Phase 3 data in 2016e).” 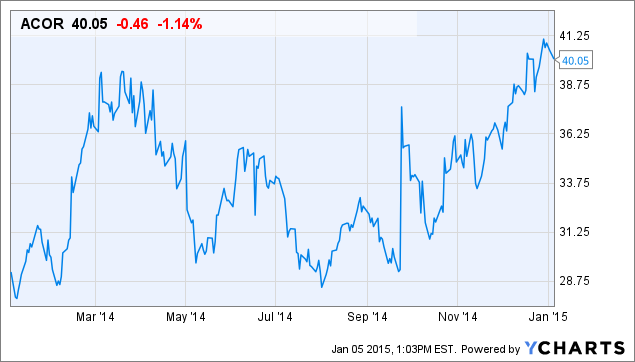