J.P. Morgan analyst Cory Kasimov is out today with an update on Acadia (NASDAQ:ACAD), straight from the 2015 J.P. Morgan Healthcare Conference. The analyst rates the stock an Overweight with a $33 price target.

Kasimov noted, “Not much news came out of the presentation/breakout. Overall, the tone of CEO Uli Hacksell’s presentation was upbeat, and most importantly, he noted the NDA for Nuplazid in PDP is on track to be submitted this quarter. The company will be ready to hire ~135 reps (targeting 11,000 docs) upon approval with launch ~3mo after. The enrollment in the ADP trial is also on track, with data anticipated late this year/early next year.”

The analyst added, “In the near term, we believe the most notable upcoming event will be submission of the NDA for pimavanserin in PDP in 1Q15. In the EU, an MAA filing is anticipated 6-9mos following NDA submission.” 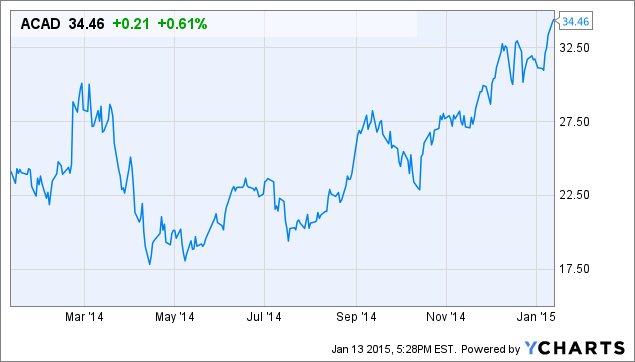