A Counter Offer For Receptos Inc From Another Bidder Is Possible: Wedbush

Receptos Inc (NASDAQ:RCPT) shares rose 10 per cent in after-hours trading, following the news that Celgene Corporation (NASDAQ:CELG) intends to acquire Receptos for $232/share or $7.2 billion net of cash, a premium of 12% to RCPT’s July 14th closing price of $207.18. The deal is expected to close in the third-quarter, however, Wedbush analyst Liana Moussatos thinks that the appearance of another bidder is possible.

In a research report released after market close today, Moussatos wrote, “We calculated an acquisition of RCPT to occur at a share price of about $348 or about $10.9 billion. Celgene stated that it expects Ozanimod’s annual peak sales to reach about $4-6 billion for RMS and UC but no credit for Crohn’s (psoriasis, SLE etc.) or the rest of the pipeline. Even if only $4-6 billion is counted, the proposed acquisition price of $7.2BN is only slightly more than ~1X peak sales. Consequently, based on our valuation for RCPT, we believe another bidder may come in as we see PLENTY of potential upside to justify it.”

As she anticipates the possibility of another bidder, Moussatos reiterated an Outperform rating and $348 acquisition value on Receptos stock, which implies an upside of 68% from today’s closing price. 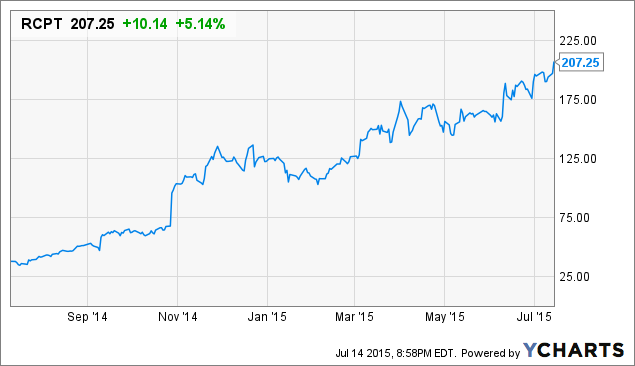