In a research report sent to investors, MLV analyst George Zavoico initiated Buy rating on Oxigene (NASDAQ:OXGN) with a $6.50 price target, which represents a potential upside of 172% from where the stock is currently trading.

Zavoico said, “OXiGENE’s vascular disrupting agents (VDAs) target an critical process essential for the survival of all solid tumors, their blood supply. With positive median progression-free survival (mPFS) results from a Phase II ovarian cancer trial with fosbretabulin, we anticipate a registrational Phase II/III trial could begin in 2015. We believe that VDAs have the potential of being safe and effective for many types of cancers, and in this regard OXiGENE initiated a Phase II trial of fosbretabulin in gastrointestinal neuroendocrine tumors and a Phase I of a second generation VDA, OXi4503, in hematologic malignancies. A near-term catalyst is the presentation of additional results from a Phase II ovarian cancer trial at a clinical meeting on November 9, 2014, that we expect will inform the design of a registrational Phase III trial.” 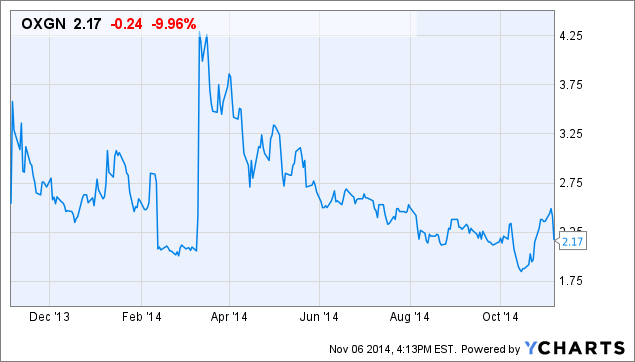