In a research report released today, Roth Capital analyst Scott Henry initiated coverage on shares of Titan Pharmaceuticals (OTC:TTNP) with a $1.25 price target, which represents a potential upside of 161% from where the stock is currently trading.

Henry wrote, “The impetus for our Buy rating is the potential of the company’s developmental Probuphine (6-month implant of buprenorphine) for the treatment of opioid dependence. We believe that the phase 3 Probuphine (partnered with Braeburn) could demonstrate improved compliance (and thus efficacy) over the current standard of care (daily sub-lingual tablets/film).”

The analyst added, “The pivotal trial for Probuphine (fully enrolled) reads out in mid-2015. Based on prior phase 3 data, we target a 70%+ probability of a successful outcome. This is a key catalyst for the shares, in our opinion. With only a modest pricing premium relative to current daily treatments, we target peak revenues for Probuphine of ~$250 million. The main lever to this forecast is a ~4% penetration of the buprenorphine market by implantable formulations. TTNP receives a ~17% royalty on these sales.”

According to TipRanks.com, which measures analysts’ and bloggers’ success rate based on how their calls perform, analyst Scott Henry has a total average return of 15.0% and a 46.9% success rate. Henry is ranked #134 out of 3428 analysts. 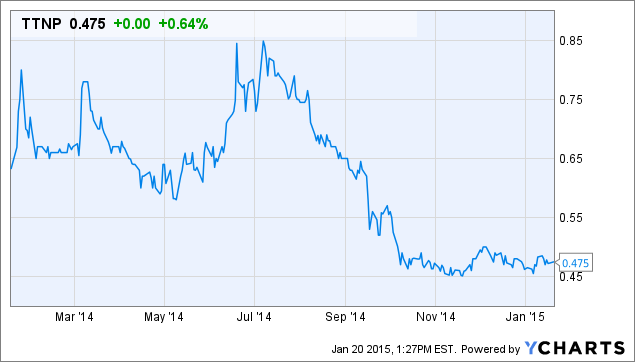