In a research report published Tuesday, Roth Capital analyst Craig Irwin initiated coverage on shares of Renewable Energy (NASDAQ:REGI) and a $17 price target, which represents a potential upside of 86% from where the stock is currently trading.

Irwin wrote, “As the largest producer of both biodiesel and renewable diesel in the U.S., we see REG as well positioned to benefit from an industry that we expect to see improving fundamentals going into 2015. The company retains one of the lowest cost structures in the biofuels industry, and REG’s constructing and engineering team continues to invest in improving the feedstock capabilities and front end process technology across its base of 10 biodiesel and green diesel plants.”

The analyst added, “Management’s recent moves to diversify operations with the acquisition of REG Life Sciences (LS9) and REG Geismar (Syntroleum) provides a path for growth and potential profit upside as the respective plants have already started producing the new products, and should both continue ramping in 2015.” 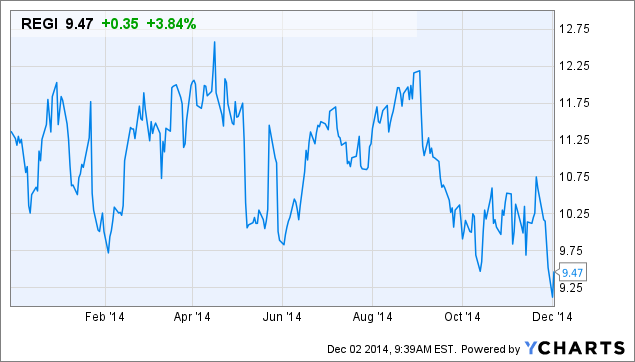