ProQR Already Represents A Long Opportunity For All Investors With An Interest In CR, Says H.C. Wainwright

In a research note released today, H.C. Wainwright analyst Andrew Fein initiated coverage of ProQR Therapeutics (NASDAQ:PRQR) with a Buy rating and a $40 price target, which represents a 158% upside from where the stock is currently trading.

Fein wrote, “Distancing itself from the growing pack of companies with CFTR potentiators and correctors, ProQR employs antisense technology to correct the F508 CFTR mutation at the mRNA level. While the company is headed to the clinic later this year, based on our view of the sector and the quality of the company’s preclinical data, we believe that PRQR already represents a long opportunity for all investors with an interest in the cystic fibrosis (CF) space. To investors who believe that Vertex (VRTX; Hold rated) will retain its hegemony in CF therapeutics and continue outperforming the biotech sector, PRQR represents a long hedge, as the only other public company dedicated to CFTR therapeutics. To investors who believe that Vertex’s CF franchise will be upstaged by equal or better potentiators and correctors from both small biotech and big pharma (reminiscent of what happened in HCV), PRQR represents a standalone long opportunity, due to its technology that mechanistically could supplant the potentiator/corrector paradigm in F508del (70% of CF population). Importantly, the applicability of the company’s RNA-based mutation-repair technology extends beyond CF and into any genetically driven disorders, making the further release of preclinical and clinical data platform-validating events in addition to value catalysts in and of themselves. Following ProQR’s strong preclinical debut at NACFC 2014 last week, and ahead of clinical data in 2015.”

The analyst continued, “Within a relatively short amount of time since its inception in 2012, the company has optimized its lead asset QR-010 (33mer RNA), and developed competitive preclinical data in CF models, replicating (if not exceeding) the reversal of the F508del CFTR phenotype produced by protein correctors. With input from both the FDA and EMA, as well as with input and support from the CFFT, the company expects to start a dose escalation study in 4Q14 (topline data in 4Q15), and an NPD study in 1Q15 (topline data in 3Q15). Now that a development/clinical path in F508del has been previously laid out or de-risked, courtesy of VX-809 and the CFFT, we believe that a positive readout from the PRQR studies in 2015—no matter how preliminary—would disproportionally compound company valuation, while likely also inviting partnering interest.”

According to TipRanks.com, which measures analysts’ and bloggers’ success rate based on how their calls perform, analyst Andrew Fein has a total average return of 0% and a 33.3% success rate. Fein is ranked #2208 out of 3340 analysts. 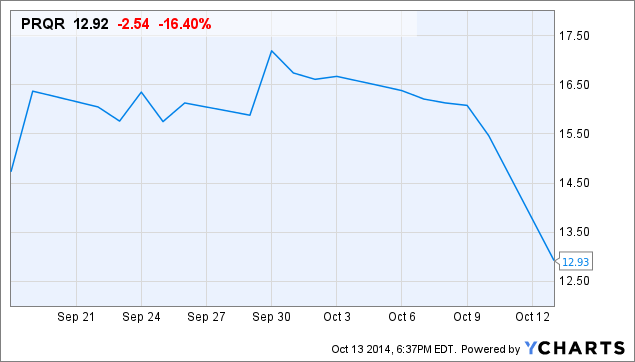 3 Healthcare Stocks That Can Double in the Next Year