MLV Initiates Buy On Tesla, Sees 27% Upside For The Stock

In a research report released MLV analyst Carter Driscoll initiated coverage on shares of Tesla Motors (NASDAQ:TSLA) with a Buy rating and a $300 price target, which represents a 27% upside from where the stock is currently trading.

Driscoll wrote, “After today’s market close, Daimler (DAI.XE-Not Rated))announced it was selling its ~4% equity position in TSLA, which we do not believe signals a change in the relationship. We believe Daimler’s divestment was to realize its substantial gain on its original investment and not a fundamental change in the two companies’ business relationship. The two companies have a long history of collaboration. In fact, Daimler went out of its way to highlight that TSLA will continue to supply full electric power train systems for Daimler’s B-class Electric Drive (ED). In 2Q14, TSLA began production deliveries of these power train systems for the B-class ED after recently competing development work. We expect deliveries to pick up as Daimler is expected to introduce the vehicle in Europe in 4Q14.” 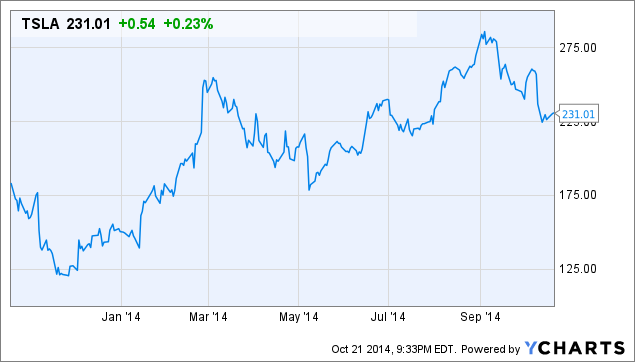