In a research note released today, MLV analyst Jonathan Petersen initiated a coverage on shares of Rexford Industrial Realty (NYSE:REXR) with a Buy rating and a $17 price target, which is based on a strong fundamental outlook for the Los Angeles warehouse market and the potential upside from the company’s acquisition strategy.

Petersen wrote, “The rise of global trade in recent decades has turned the LA warehouse market into the largest in the country, and has resulted in a lack of developable land in LA County — this has naturally led to high occupancy and above average rent growth for the past 30+ years. While REXR is not the only Industrial REIT with properties in the market, they are the only one headquartered there, which allows the company to be an operational sharpshooter. REXR often takes a value-add approach to acquisitions, which allows the company to achieve higher acquisition yields on stabilization, but often means that properties are under-leased. The company’s current vacancy of 9.5% compares to market vacancy of 2.0% — closing this gap is a reasonable assumption and should lead to significant FFO and NAV accretion.”

The analyst continued, “REXR’s portfolio is entirely located in Southern California, with 85% of revenue coming from the Los Angeles metro area (including 55% from LA County) and 15% from the San Diego market. REXR is the only Industrial REIT that is exclusively focused on the Southern California markets, and also the most concentrated on any one market. We view this concentration as a positive because it allows management to be more visible in the market, and investors tend to put a higher value on companies that allow them to allocate their portfolio geographically.”

According to Tipranks.com, which measures analysts’ and bloggers’ success rate based on how their calls perform, analyst Jonathan Petersen has a total average return of 3.8% and a 64.3% success rate. Petersen is ranked #1430 out of 3354 analysts. 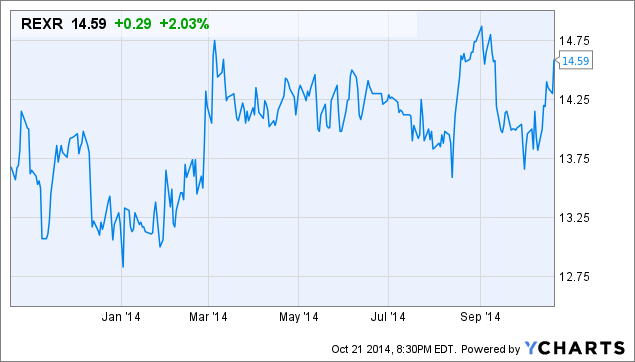