In a research report released today, Maxim Group analyst Jason McCarthy initiated coverage on shares of Juno Therapeutics Inc (NASDAQ:JUNO) with a Buy rating and a price target of $78, which represents a potential upside of 52% from where the stock is currently trading.

Mccarthy wrote, “We believe that we are seeing the tip of the iceberg with CAR-T and that B cell cancers are just the beginning. The data that we have seen so far from CD19 CAR-T cells in B cell cancers is exciting and, to us, demonstrates proof of concept. Juno has three CD19 CAR-Ts at three leading cancer centers, two of which could be approved by 2017. Given the unmet medical need and efficacy shown to date (despite some safety issues), we believe the probability of approval is high. The market seems to already be assuming success, at least in r/r B cell cancer, which may be a >$1B opportunity for Juno—even if the market is shared with Kite and Novartis.”

“In time, we expect Juno to show success in solid tumors, perhaps through armored CARs or in combination with one of the other technologies. As such, we believe the valuation is reasonable given the value of the total platform, how quickly proof of concept can be demonstrated, and the large number and diverse nature of the company’s current programs.”, the analyst adde.

According to TipRanks.com, which measures analysts’ and bloggers’ success rate based on how their calls perform, analyst Jason Mccarthy has a total average return of 10.9% and a 50.0% success rate. Mccarthy is ranked #1788 out of 3629 analysts.

Out of the 3 analysts polled by TipRanks, two rate Juno Therapeutics stock a Buy, while one rates the stock a Hold. With a return potential of 24.7%, the stock’s consensus target price stands at $64. 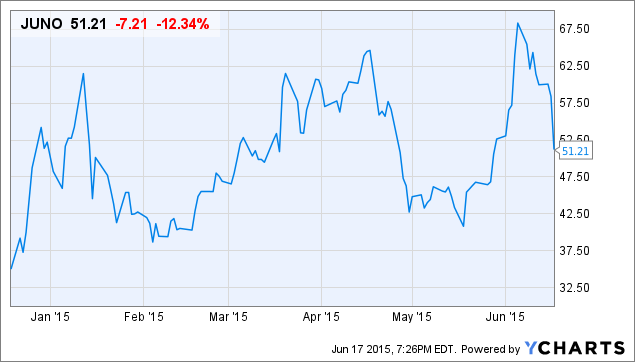