We Like TASER’s Price-Maker Position And Opportunity For Long-term growth, Says Oppenheimer

In a research report published today, Oppenheimer analyst Andrew Uerkwitz initiated coverage on Taser International (NASDAQ:TASR) with an Outperform rating and a $28 price target, which represents a potential upside of 13% from where the stock is currently trading.

Uerkwitz wrote, “TASER is known for its production of conducted electrical weapons (CEWs). The company has emerged as one of the leading players in the potentially rapid growing space of on-officer body cameras and digital evidence management.”

The analyst added, “We believe TASER’s widespread success in CEWs has paved the way to make it the leading technology provider to law enforcement agencies. Although recently announced Federal support of on-officer cameras combined with mounting pressure from the public for their adoption has pushed the stock to high premiums, we like TASER’s price-maker position and opportunity for long-term growth.”

According to TipRanks.com, which measures analysts’ and bloggers’ success rate based on how their calls perform, analyst Andrew Uerkwitz has a total average return of 6.9% and a 62.8% success rate. Uerkwitz is ranked #882 out of 3423 analysts. 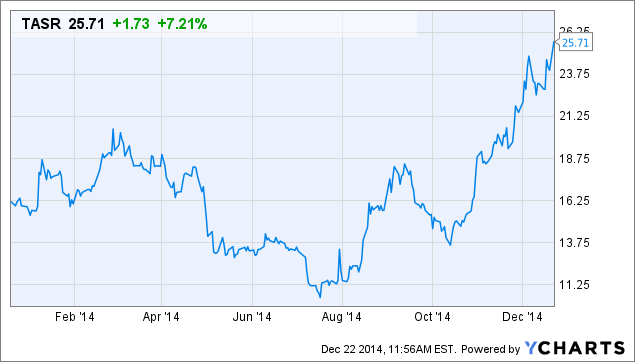 Zack’s Bull of the Day: TASER