In a research report released Friday, Chardan analyst Gbola Amusa initiated coverage on shares of Uniqure NV (NASDAQ:QURE) with a Buy rating and a $40 price target, which represents a potential upside of 53% from where the stock is currently trading.

Amusa wrote, “We continue rolling out coverage on leading names in segments of therapeutics (e.g. gene therapy) that are likely to generate excess returns in the coming decade. uniQure is a gene therapy company that has already achieved, via Glybera (for lipoprotein lipase deficiency), the first gene therapy approval in Europe. The value of the company we think is much more dependent on AMT-060, which is in phase I/II trials for the treatment of hemophilia B and has important catalysts upcoming.”

Bottom line: “We expect outperformance for QURE due to likely overall success on AMT-060 and other nearing catalysts, namely: 1) the possible Glybera European roll-out in 2H15, 2) phase I/II AMT-060 hemophilia B interim data in 3Q15, and 3) phase I/II Sanfilippo B data in 3Q15.”

According to TipRanks.com, which measures analysts’ and bloggers’ success rate based on how their calls perform, analyst Gbola Amusa has a total average return of 18.2% and a 66.7% success rate. Amusa is ranked #643 out of 3579 analysts. 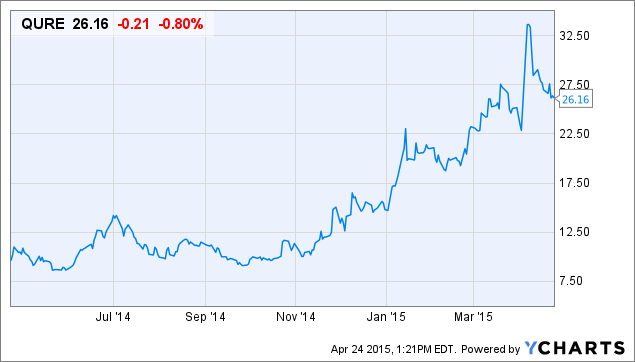