In a research report issued today, Chardan Capital analyst Gbola Amusa initiated coverage on shares of Amicus Therapeutics, Inc. (NASDAQ:FOLD) with a Buy rating and a $14 price target, which implies an upside of 14% from current levels.

Amusa wrote, “On 26 May 2015, the EMA granted Accelerated Assessment to the oral small molecule pharmacological chaperone, migalastat, Amicus Therapeutics’ flagship precision medicine for Fabry Disease. This promising development may signal favorable regulatory (and possibly reimbursement) stances for the company’s key asset, as a consequence of what we see as compelling phase III clinical data produced to date. With accelerated US approval also possible, Amicus may see migalastat enter both US and EU markets in 2016, putting the compound on firm footing to achieve what we model as $542 million in 2020E sales (versus consensus of $274 million), en route to $964 million in 2025E sales.”

“Recall that, on 7 May 2015, we recommended Amicus, expecting upside for shares, on our view of Amicus as a potential M&A target in the rare disease space. Given the threat that migalastat poses for products from Shire and Sanofi, as we think is supported by the favorable 26 May EMA news, we continue to see Shire and Sanofi as potential acquirers of Amicus.”, the analyst added.

According to TipRanks.com, which measures analysts’ and bloggers’ success rate based on how their calls perform, analyst Gbola Amusa has a total average return of 9.1% and a 56.7% success rate. Amusa is ranked #1081 out of 3610 analysts. 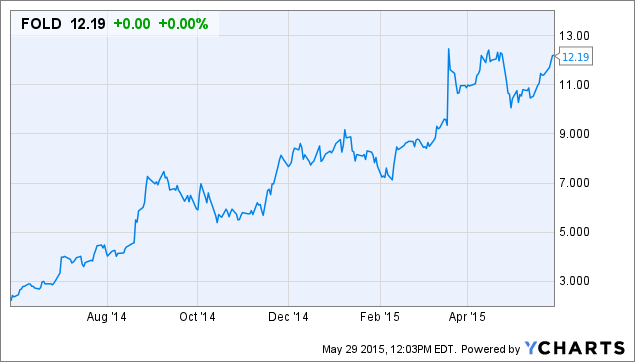