Canaccord Initiates Buy on On Deck Capital Inc; Sees 80% Upside for the Stock

In a research report released Friday, Canaccord analyst Michael Graham initiated coverage on shares of On Deck Capital Inc (NYSE:ONDK) with a Buy rating and a $22 price target, which implies an upside of nearly 65% from current levels.

Graham noted, “The fundamentals of OnDeck’s business model are improving as its operating history grows and existing customers validate the value proposition of borrowing from OnDeck.” Furthermore, “We believe OnDeck can originate over $2B in loans in 2015, $3.3B in 2016, and nearly $11B in 2020. We expect the company can grow gross revenue by 69% this year, 58% in 2016, and 37% in 2017. We believe the company can generate an EBITDA margin of 27% on gross revenue and 49% on net revenue by 2020, with a good opportunity for upside.”

However, “High borrowing rates and balance sheet funding are risks. The average borrowing rate for an OnDeck loan was 37% APR in Q1, down from 41% a year earlier. We believe competition and more repeat borrowers may continue to push this lower. In addition, since OnDeck still funds the majority of loans from its balance sheet, any unexpected increase in defaults would result in immediate losses and be a headwind to profitability.”

According to TipRanks.com, which measures analysts’ and bloggers’ success rate based on how their calls perform, analyst Michael Graham has a total average return of 14.8% and a 55.4% success rate. Graham is ranked #181 out of 3721 analysts.

Out of the 7 analysts polled by TipRanks, 5 rate On Deck Capital Inc stock a Buy, 1 rates the stock a Hold and 1 recommends Sell. With a return potential of 99.0%, the stock’s consensus target price stands at $26.60. 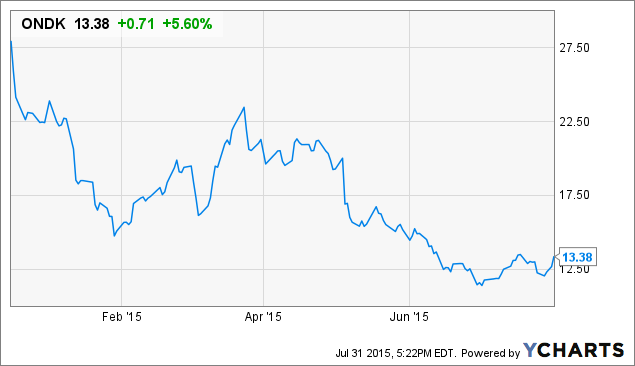 All Systems Go: Analysts Weigh In on PTC Therapeutics, Inc. (PTCT) and On Deck Capital Inc (ONDK) as Shares Dive