We Believe Veeva Can Reach Over $1 Billion In Revenue By Calendar 2020, Says William Blair

Suri wrote, “We point out that given the company’s growth rate, market opportunity, first-mover advantage, and incremental offerings, we expect Veeva to reach the $1 billion revenue mark by the end of calendar 2020. Applying a 7-times multiple (for many reasons, but one being that Oracle typically pays 7-times recurring revenue for acquisitions; SAP tends to pay a little more), we would arrive at a $7 billion market cap. Still, given that many companies in this group are not profitable or do not generate much free cash flow, we usually use a revenue multiple for comparison purposes, but as SaaS companies begin to generate cash and earnings (e.g., Fleetmatics [FLTX $31.53; Outperform] or salesforce), we encourage investors to look at EV/FCF multiples. Further, as companies become more profitable, while their earnings multiples remain in line with the group, the revenue multiple certainly looks more expensive simply because they are more profitable. Assuming top-line growth in calendar 2020 has slowed to 15%, we believe the company can achieve EBITDA margins between 35% and 40%. Using a 35% EBITDA margin, and applying a 12-times multiple (which is quite conservative as EBITDA and cash flow would still be growing at 15%-plus), we arrive at an enterprise value of roughly $5 billion. We suspect that the multiple will probably be higher than 12 times, but even in an effort to be fairly conservative we see solid upside from current levels.”

According to TipRanks.com, which measures analysts’ and bloggers’ success rate based on how their calls perform, analyst Bhavan Suri has a total average return of 6.9% and a 52.0% success rate. Suri has an average return when recommending VEEV, and is ranked #1123 out of 3293 analysts. 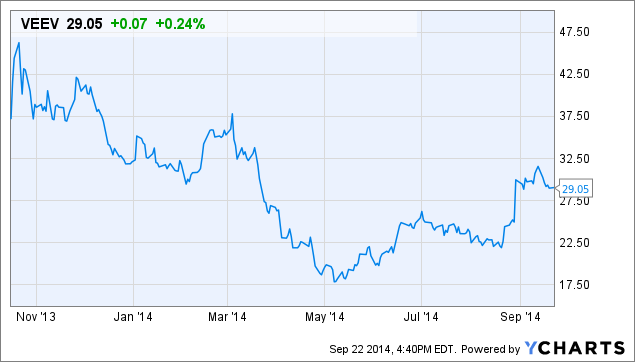