In a research report issued Monday, Axiom analyst Victor Anthony initiated coverage on shares of Pandora Media Inc (NYSE:P) with a Hold rating and a $17 price target, which implies an upside of 7% from current levels.

Anthony wrote, "We were encouraged by Pandora’s recent Analyst Day, which featured well-articulated plans on monetization, artist engagement, product enhancements and International growth. Further, Pandora’s share of radio listening continues to grow and new data suggest that Pandora is the most engaged mobile platform in the U.S. However, competition continues to increase with each passing year, exerting pressure on plans to drive the next 20M active users to the platform. Moreover, uncertainty tied to the CRB rate decision makes valuation of the shares somewhat ambiguous."

Furthermore, "The risks Pandora faces later this year from the CRB rate decisions appear well understood by investors, with an adverse ruling (SoundExchange proposal) likely to impair the equity, while a rational ruling would keep management’s focus on executing against the strategies laid out at the recent analyst day. Most industry participants we speak with are convinced that Pandora will face an adverse ruling. However, market rate deals by Pandora and competitors point to a more rational outcome, in our view." 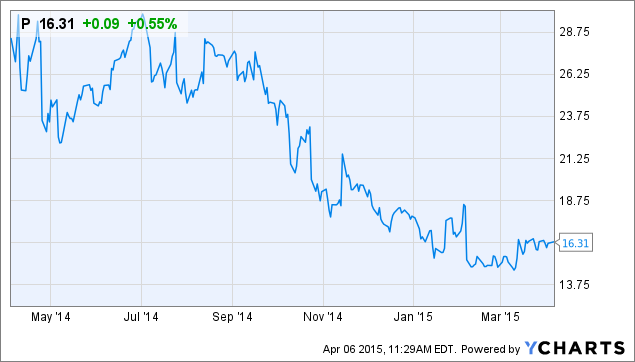