In a research report published Monday, Axiom analyst Victor Anthony initiated coverage on shares of Twitter Inc (NYSE:TWTR) with a price target of $60, which represents a potential upside of 24% from where the stock is currently trading.

Anthony noted, “User growth will likely continue to be a key investor concern for Twitter this year, but we see a greater than 50% chance for Twitter to maintain respectable user growth with product innovations. Moreover, per user advertising monetization should increase meaningfully over time, allowing Twitter to narrow the monetization gap with peers. As Street revenue and Adjusted EBITDA estimates continue to increase with each reported quarter, the shares, like Facebook’s, should trade on the monetization opportunity, rather than on user growth.”

“Our price target is based on a 40x multiple to our 2016 EBITDA estimate and is supported by a DCF with a WACC of 9.3% and a 7.8x implied terminal-year multiple on EBITDA. Twitter trades at 56x our 2015 EBITDA estimate and 14x revenues. We project that Twitter will grow revenues and Adjusted EBITDA at 54% and 79% three-year CAGRs (2014-2017), respectively.”

According to TipRanks.com, which measures analysts’ and bloggers’ success rate based on how their calls perform, analyst Victor Anthony has a total average return of 19.2% and a 72.1% success rate. Anthony is ranked #46 out of 3492 analysts. 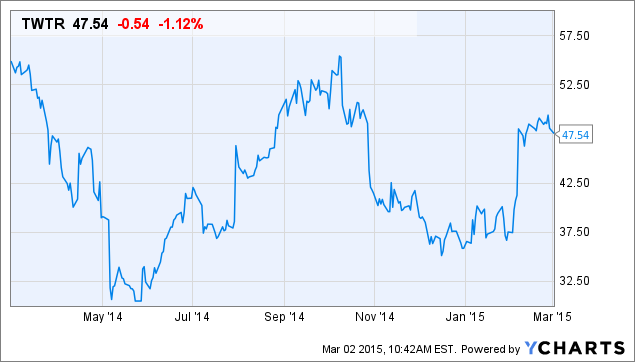