In a research report issued Friday, Axiom analyst Victor Anthony initiated coverage on AOL, Inc. (NYSE:AOL) with a Buy rating and a $47 price target, which represents a potential upside of 18% from where the stock is currently trading. AOL shares are currently trading at $40.02, up $0.24 or 0.60%

Anthony wrote, “The shares have languished this year as a consequence of zero EBITDA growth guidance for 2015, due to incremental investments in Brands and AOL Platforms, plus a sales force restructuring that will drive revenue declines in 1H15. The set-up post this investment year calls for a return of that investment in the form of faster revenue growth and higher incremental margins at both segments, leading to what we believe should be above consensus 2016 EBITDA.”

“As we progress through the year, investors should become more comfortable with the set-up for 2016 and the shares should move higher. Downside is at half a multiple turn, for share price in the mid-$30s. Catalysts along the way include traction on One, performance above guidance, and share repurchases. Expect further expense reductions post this investment year. We believe an acquisition/merger scenario could again emerge as part of the bull case.”, the analyst added. 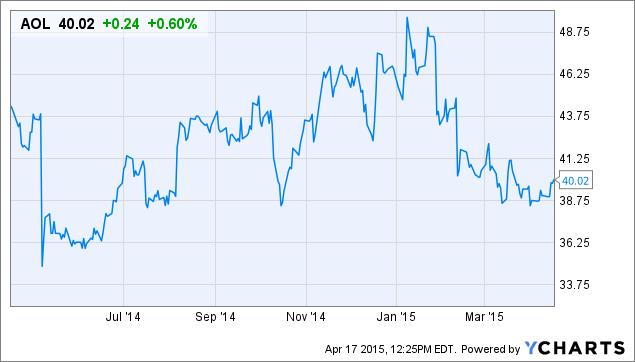