In a research report released April 20, Oppenheimer analyst Ling Wang initiated coverage on shares of Agios Pharmaceuticals Inc (NASDAQ:AGIO), while no price target was provided. Agios shares are currently trading at $107.42, down $0.73 or 0.68%.

Wang noted, “AGIO has built an impressive pipeline of precision medicines in the field of cancer metabolism and rare genetic disorders of metabolism. IDH inhibitors AG-120 and AG-221 have demonstrated impressive proof-of-concept in subsets of AML patients, and AG-348 has demonstrated positive PD in healthy volunteers.”

However, “Though we believe all three product candidates have great potential, we believe the current valuation has factored in several positive outcomes, including potential success of AG-120 and AG-221 in AML and solid tumors and of AG-348 in PK deficiency. As such, we view AGIO shares as fully valued at current levels given the development stage of the pipeline products and recommend investors to await a better entry point.”

According to TipRanks.com, which measures analysts’ and bloggers’ success rate based on how their calls perform, analyst Ling Wang has a total average return of -2.8% and a 35.5% success rate. Wang is ranked #3076 out of 3575 analysts. 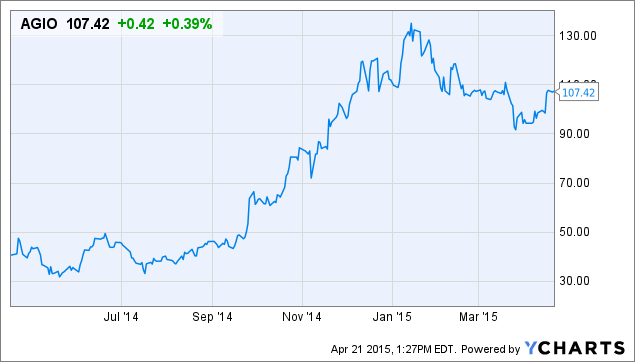